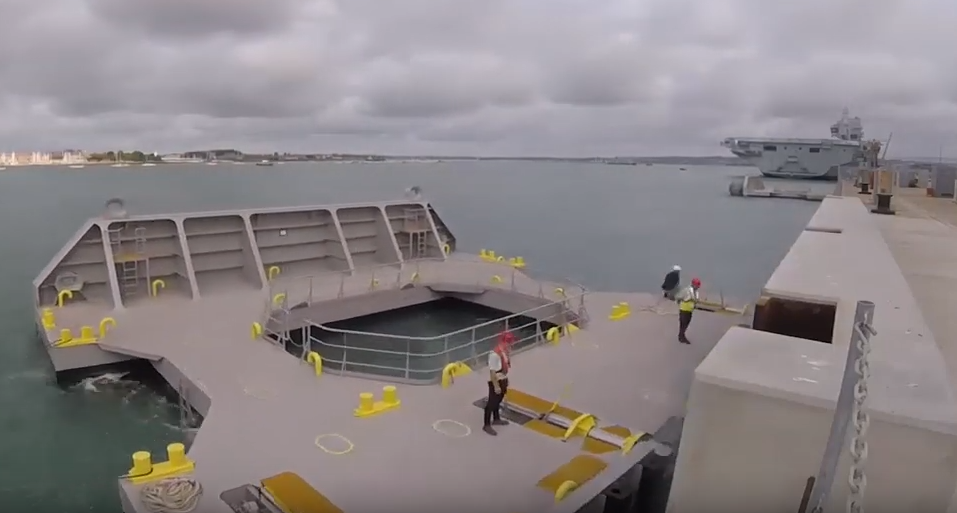 The Queen Elizabeth Class (QEC) comprises the two new Royal Navy Aircraft Carriers. The lead ship, HMS Queen Elizabeth was commissioned December 2017. At circa 75,000 tonnes, the new aircraft carriers are the largest warships ever operated by the Royal Navy.

As a direct consequence of the size, significant infrastructure improvements were required for the ships to be accommodated at Her Majesty’s Naval Base (HMNB)  Portsmouth.  As part of these improvements, Houlder was contracted to design Fender Spacer Units (FSUs) which play a key role in berthing arrangements and accommodating QEC’s flight deck. These dedicated berthing devices were required to prevent the high overhanging deck clashing with equipment onshore. In doing so, the FSUs were also required to safely transmit large berthing and environmental loads from the QEC into the mooring jetty structure. They also provided a safe platform for security divers to operate while carrying out security checks due to their stability.

Mark Beck, Houlder’s project director commented: “We are very pleased to have been appointed for this high-profile project. It is the latest of a series of innovative ship-to-shore infrastructure projects including defence, local government and marine transport clients.”

Houlder’s Fender Spacer Units absorb loads through hydraulic arms that slot into the new jetty and, importantly, move with rising and falling tides. They keep the QEC hull about 20 metres away from the mooring jetty to accommodate the flight deck overhang and protect the QEC hull structure from impacts.

The FSUs were delivered to the main contractor as part of their £100 miilion project at HMNB Portsmouth that included dredging the harbour and constructing a strengthened jetty works in preparation for the arrival of the new aircraft carriers. HMNB Portsmouth is now fully equipped to be the home of the Queen Elizabeth Class fleet.