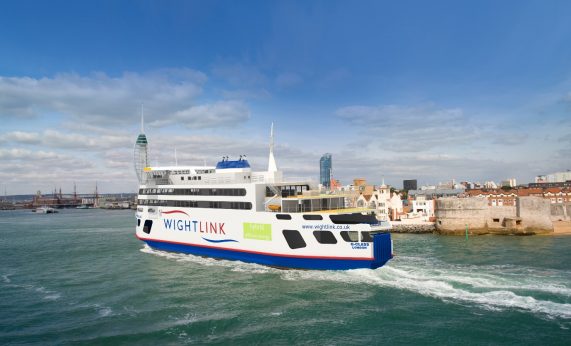 Houlder has been working with Wightlink on a new ferry for operation between Portsmouth and the Isle of Wight for over five years.  Houlder was originally responsible for the concept design of the Wightlink G Class ferry and production of a Technical Requirements document. This process reflected Wightlink’s desire to be as environmentally friendly as possible by reviewing a number of “green” fuel options including LNG and electric propulsion.

When Houlder won the tender to design the vessel, the brief specified a ferry that would be energy efficient and have a reduced carbon footprint compared to other vessels of a similar size. Houlder is a strong supporter of green technology, so designed the vessel as a diesel-electric hybrid ship operating on Marine Gas Oil (MGO) and batteries.

The power storage is large enough that all the MGO engines can switch off while loading and unloading in port. This gives zero emissions and reduces operating noise giving fewer disruptions for local residents. Battery electric hybrid power was selected due to space, availability of fuel and overall flexibility of the solution.

The vessel also has a number of other ingenious energy saving features such as LED motion sensitive lighting, elevators that put power back into the ship’s electrical system and heating that uses waste heat from the engines. The engines are being supplied by Wartsila and the batteries are by Corvus Energy. Its battery packs are powerful enough to smooth out power demands so the engines run closer to optimum efficiency.

Once the design was finalised, and Cemre shipyard, Yalova Turkey had won the construction tender, Houlder was named Wightlink’s owner representative and technical advisor. This role includes ongoing plan approval on the Shipyards detailed design and drawings.

As part of the role, Houlder engineers make regular site visits to inspect progress of vessel production and to ensure the quality, standards and shipbuilding progress meet the needs of the owner.

Senior Naval Architect David Wing (pictured) has recently returned from two weeks at the shipyard to inspect the progress of the vessel. David commented ‘It is always exciting to see steel being erected and the vessel starting to take shape. Working closely with Wightlink and Cemre means we can help identify and solve issues before they become problems, supporting both the shipyard and Wightlink to help ensure the ship reaches service on time.” Houlder’s Marine Design & Consultancy business has its headquarters in Portsmouth, and having been involved in every phase of the G-Class Hybrid vessel development,  the team is looking forward to seeing Wightlink’s new flagship finished and servicing the local population.

Houlder will continue to support the Wightlink G Class Ferry project with support and technical services during the build phase. The ferry is due to enter service in the summer of 2018.