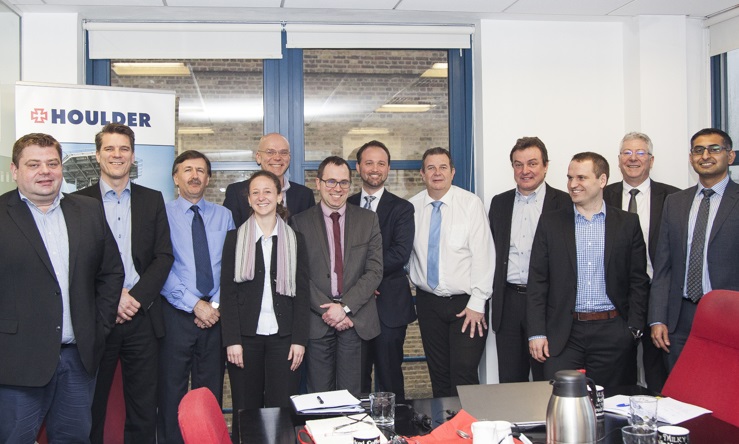 Key players in small to mid-scale LNG industry took a step closer to standardisation on the 11-12 January, 2017. The 6th Society of Gas as Marine Fuel (SGMF) working group “LNG Bunkering: Functional Design Requirements” met at Houlder’s City of London headquarters and was hosted by Gianpaolo Benedetti, Houlder’s LNG Project Manager. SGMF members discussed the standardisation of bunkering manifold connectors and safety requirements for bunkering controls . Consistency in small to mid-scale bunkering operations is key to championing the wider use of LNG as a cost-effective fuel for future shipping.

Houlder is well suited to hosting these groups. It is a founding member of the SGMF, a supplier of LNG transfer products designer of the UK’s first dual fuel ferry and author of key infrastructure studies and reports. The company can justifiably claim to be at the forefront of LNG as fuel developments.

Senior managers from the SGMF itself, KLAW LNG,  Wärtsilä, Bomin Linde, ENGIE, Shell, GTT, FMC Technologies, Babcock International, ARTA, Mann-Tek and Lloyd’s Register travelled from across Europe for the opportunity to share small to mid-scale LNG solutions in an open and frank exchange of ideas. Gianpaolo Benedetti commented “The real value of the LNG working group is ensuring suppliers of bunkering equipment engage with each other and end users. The future of LNG as an every-day marine fuel is dependent on the spirit of collaboration fostered by the SGMF. We’re delighted to be part of it.”

At the end of the two days, it was clear there was a genuine commitment to invest resources and time in moving standardisation forward. This should give everyone involved confidence that the outlook for small to mid-scale LNG operations and wider use of LNG as a fuel look positive for 2017 and beyond.